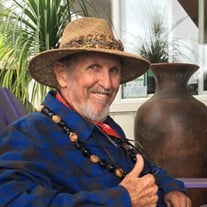 William James Crockett aka “Chaplain Bill” aka "Barnacle Bill" passed away peacefully at home in Kaneohe, Hawaii at the age of 68 on December 5, 2017. He was born on April 9, 1949 to Margaret and William Jack Crockett at the Naval Hospital in San Diego. Bill attended public school in Pearl City and Punahou. After high school he spent a year at the California Maritime Academy. He then returned to Oahu where he attended the University of Hawaii graduating with a major in English, but always felt the Hawaiian Chorus and Hawaiian language classes were the highlight of his education there. Later in life, Bill pursued training as a Chaplain through the Vancouver School of Theology’s Native Ministries Consortium and Pacific Health Ministry’s Clinical Pastoral Education program, completing his Clinical Pastoral Education at Queen’s Medical Center. In 1975, Bill moved to Kona where he was a yacht broker, a real estate broker at Century 21 and later the General Manager of Lanihau Center. He used his maritime academy education as a marine engineer with a Christian hospital ship program called Mercy Ships which took him to West Africa, Holland, Australia, Vanuatu, and New Zealand. He also worked on many locally based ships, including SS Independence, Hawaii Responder, and the University of Hawaii research vessel. During his years on Maui he used his vast knowledge of Hawaiian Culture as a tour guide across Haleakala Crater and Hana. Bill became a hazardous waste responder working on Kahoolawe and Puerto Rico removing unexploded ordinance to increase his income, allowing him to serve his deeper passion as a chaplain. In 2008, Bill became a Chaplain with Bristol Hospice providing spiritual care to hospice patients and staff throughout Oahu for over 8 years. Bill was a long time member of Central Union Church where he served as Minister of Visitation attending to needs of members who could no longer attend. Bill delighted in and had a passion for music, singing in the Punahou Glee Club and various choirs. He was a thespian at heart performing in numerous musicals throughout the islands. In his work as a hospice chaplain, he used his musical talents singing Hawaiian music and playing ukulele, bringing much happiness and peace to the dying. Bill’s great love of the sea and travel took him yacht racing, paddling, diving and delivering yachts throughout the Pacific. Bill will be fondly remembered and missed by his long-time fiancé, Nancy Piper, 2 daughters; Cory Crockett and Carlen Koons, 3 grandsons; Liam Aspirin, Toby Aspirin and Bennett Koons; 2 brothers; Clyde Crockett and Keith Crockett, and Father; William Jack Crockett. Bill was a lover of many things, but none more than the people in his life. He was the happiest with his family and friends from around the world. Once you were a friend of Bill’s, you were a friend for life. His ashes will be scattered at sea where he has created many happy memories with family and friends. A celebration of Bill’s life will be held at Central Union Church in Honolulu on January 20, 2018. There will be a 3 pm visitation with services and reception to follow at 3:30. The family kindly requests donations be made to the Aloha Chapter of the Alzheimer’s Association in lieu of flowers.

William James Crockett aka &#8220;Chaplain Bill&#8221; aka "Barnacle Bill" passed away peacefully at home in Kaneohe, Hawaii at the age of 68 on December 5, 2017. He was born on April 9, 1949 to Margaret and William Jack Crockett at the Naval... View Obituary & Service Information

The family of William James Crockett "Chaplain Bill" created this Life Tributes page to make it easy to share your memories.

Send flowers to the Crockett family.